This week’s assignment from the League: How to destroy the Death Star

We all have our own skills and talents, and I thought that this week we could learn a thing or two from one another. This week’s League challenge…
—
Write a step-by-step guide on how to do something. This could be a real world project or a fantastical one, so do with it as you will. 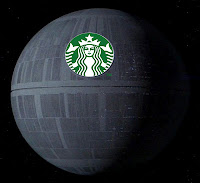 total time involved: approximately 6 standard galactic months, and not a single Proton Torpedo impacted on the surface. By the way, can I interest anyone in a used X-Wing? only piloted by a little old lady on her way to Jedi Temple.

I look forward to seeing what Green Plastic Squirt Gun, The Sexy Geek's House of Swag, Cool and Collected, and 3B's Toy Hive come up with, as well as everybody else!
Posted by Mr Smith at 11:42 AM