I have a surprisingly vivid memory of this- I excelled at Omega Race and Tempest, was OK at Space Invaders, sucked ass at Asteroids, and played Star Castle whenever I could find it.

First, on the theater, this was not the infamous Aurora Mall theater where the Dark Knight Rises shooting took place in 2012.  This was inside the mall, a Mall which has undergone more face-lifts than the proverbial lovechild of Joan Rivers and Michael Jackson (Too Soon?). and now even a shopping mall is an endangered species. Back then, we never even imagined someone shooting up a theater, the biggest fear we had was older kids bullying us.

But I feel I have digressed. we found this gem(myself and whoever I was with.that I don't recall- or the movie I was seeing) this two-player PVP miracle of science. I remember that you could set the conditions for the battlefield, gravity on, gravity off, sides closed, sides open, black hole...The ships could be damaged without being destroyed, but would suffer in performance as well. I had forgotten that it was a timed amount of play, but I recalled that upon reading the Wiki article I found. One of the ships looked like a star destroyer(wedge shaped) while the other resembled the movie Enterprise, with the engine pods swept back 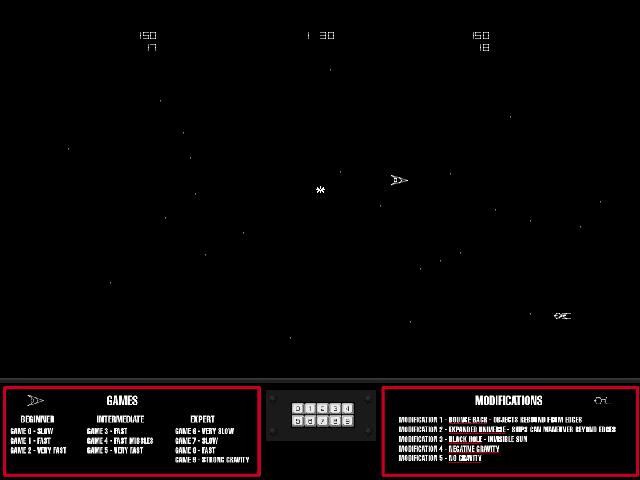 I remember being pretty good at it. I liked to pick the other ship apart, rather than destroying it outright. I don't remember how many quarters I dropped into it, just that it was never enough, for me. Then one day there was a new game at the theater, and Space Wars disappeared from my life except for memory and occasional sightings at older private arcades.

I mentioned Omega Race, and I recall best playing that at a restaurant called the Yum yum tree- it was like a buffet and a food court in one. you could taste foods there you had never even heard of. For me, a kid whose most exotic meal was what Mom called Mock Sukiyaki(and was pepper steak over minute rice in reality) it was amazing. With this came the opportunity to destroy the training drones in Omega Race. there was a trick to it. A nasty, dirty yellow, gutless sonnovabitchin trick. You went to one side of the square, and took a couple of shots. while the drones are coming up that side, you go down the other and blow merry hell out of them from behind.

Anyway, I think this is my stack of quarters spent on nostalgia. I will let someone else get on the machine now. Nowadays the only game I play in the arcade is "Laundry!" and I usually win.