It’s the most wonderful time of the year...

What does Halloween mean to me? Halloween was always my time to be someone else, to shed my skin and become someone else for a night. As I grew older, different outlets opened up, like conventions, D&D, the renaissance festival...But Halloween memories and the feelings this time of year evoke for me have stayed through all those changes.

I remember looking for an appropriately sized Ben Cooper costume at Woolco. The costume was folded in a box, with the mask on top.

I remember the Batman Costume... Silver age, 1960s/70s era Batman that I wore one year. That synthetic(probably flammable) costume and the stiff plastic mask with the little mouth slit. I found this online with what I remember it being like.
I remember one year jumping out to spook someone and spilling...my...entire bag of candy. I remember the person I spooked patiently helping me pick up my candy, and I remember feeling like an absolute tool.

I remember putting on a black turtleneck and draping a piece of cloth over my neck and thinking I had achieved this effect: 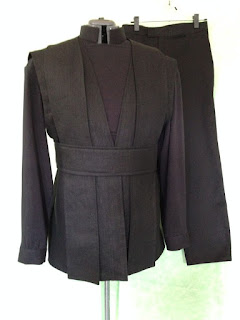 I remember later wrapping that cloth around my head to be a ninja.(same night)

I remember never dressing as the monster or the villain, always the hero. There was one year I had a clown costume, but they really only got super-creepy later on.

These days, I prowl the costume aisle and shops to see the trends, usually based on whatever movie was popular this year. I watch spooky movies to set the mood, and I observe All Hallows eve as the traditional last night of the year. I say farewell to the ones lost and bid them good journey to their next place.

The last two Halloween parties I went to were at my neighbors, one was a B-movie theme(tuck a katana inside a trench coat and you are the Highlander!) and the other was a superhero party. I dressed as Green Arrow(longbow hunters timeframe) and was mistaken for Robin Hood all night.

Some people ain't got no culture, you'know? And I couldn't even tell them they had failed the city...

And now for some folks who did not fail the city: